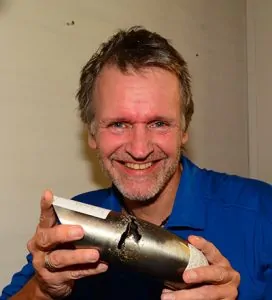 Claus Qvist Jessen is born 1960 and is educated at the Technical University of Denmark as chemical engineer (1985) and ph.d. (1989). Prior to his employment at Damstahl a/s, Skanderborg, Claus has a curious past as consulting engineer specialised in stainless steel with FORCE Technology, Cleanodan and Risø.

Since 2007, Claus has been employed with Damstahl a/s in Skanderborg, Denmark, dealing with the same type of work as before: Being a stainless Sherlock Holmes, and investigate why corrosion has occurred and what to do about it, including preventing future attacks. As knowledge is a major part of prophylaxis, Claus has spent a major part of his time “spreading the stainless word”, not only to Damstahl customers but also to students and professionals abroad. This includes employees at Icelandic and Faeroe fish processing plants and engineering students in Scandinavia and technical colleges in Uganda. Anywhere where people are in need of knowledge on stainless steel, corrosion and surface treatment.

As a writer, Claus has contributed to no less than seven books on stainless steel, corrosion and surface treatment. Three of these were written in collaboration with the colleagues of FORCE Technology, while the remaining four have been written during his present work at Damstahl. In between the books, a number of stainless steel articles have seen the light of day.

On the less technical level, Claus has spent a substantial part of the last 35 years along the dusty roads abroad. His travelling covers a number of highly unusual tourist countries, from Afghanistan and North Korea to Sudan and Somalia, plus the less “extreme” India, Tibet, Caribbean, Latin Amerika and the Pacific islands. Back in Denmark, some of the stories have been passed on to the Danish and international public, either as vivid lectures on tropical travelling or as articles on weird sports fishing.

Dr. Imre Felde was born 19.07.1973. in Hungary. He achieved his PhD in Materials Science and Technology from Miskolc University (Hungary) in 2007. From 1995. to 2008. he was head of department and from 2008 to 2012. CEO of Bay Zoltán Foundation for Applied Research, Budapest, Hungary. From 2012. he is Vice Dean of Faculty of Informatics, Obuda Univesity in Budapest, hungary. He has published more than 100 scientific and technical papers in field of engineering, computer science, mathemathics and process modeling. He is member of editorial board of Strojniski Vestnik-Journal of Mechanical Engineering, International Journal of Microstructure and Mechanical Properties, Surface Engineering and Hindawi Advanced Materials Science and Technology.

Josipa Delaš obtained a master’s degree in mechanical engineering at the University of Zagreb, Faculty of Mechanical Engineering and Naval Architecture in 2019. Currently works at INETEC, Institute for nuclear technology as a mechanical designer. She joined the ITER project as a member of INETEC’s team in 2018.